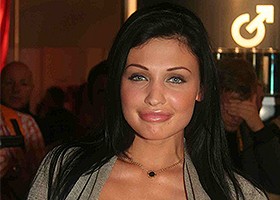 Aletta Ocean is a Hungarian porn star and professional escort. Her real name is Dora Varga and she was born on 12/14/1987, in Budapest, Hungary. Aletta is 5’8” (1.73m) tall and weighs 136 lb (62 kg). She’s got black hair and blue eyes. Her tattoos are the word Savage on the wrist and a big tiger on the left shoulder. She has piercings in the tongue, navel, and mid-pubes. Before her current career, she studies to get a degree in an economic school. At the age of 19, she began modeling and won Miss Tourism Hungary. She participated in Miss Hungary and got to top 6 in this beauty contest. Aletta modeled for Playboy (both editions – the Hungarian one and Penthouse). As a professional escort, she charges more than $1000 per hour for her services.

Her works in the movies brought her the 2010 AVN Awards in 2 categories: Female Foreign Performer of the Year and Best Sex Scene in a Foreign-Shot Production.
Leaked Photos: http://thefappeningblog.com/category/aletta-ocean/