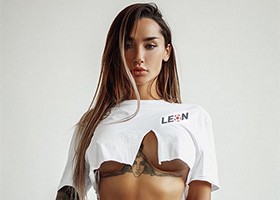 Angelica Anderson is a fitness star who became really notable mostly via Instagram. You can find the account by Angelica Anders as well. Followers often call her the Russian Tattoo Fitness Model. Angelica comes from Russia where she was born on March 18, 1990. Her height is 1.74 m and her weight is 60 kg. Angelica has black hair and green eyes. Her Zodiac sign is Pieces and mother tongue is Russian. Nevertheless, the published texts are in English and Russian.

She studied in the Art schools but got disappointed in this realizing that’s not what she likes. After making her first tattoo (the wings) she realized she had found her passion and became a tattoo master in 2011.
In 2013 Angelica was the ring girl for Jeff Monson’s match.

Nowadays her public accounts gather more than 1 million people from all over the world.

The girl is not only a fitness model now. She works as a trainer and shares her sports routine in regular posts. Her posts are often the videos of her exercises in slow-motion including weightlifting, rope jumping, and other workouts.

Her so-called trademark is the tattoo pattern all over her body. Anderson is one of the Marvin models.