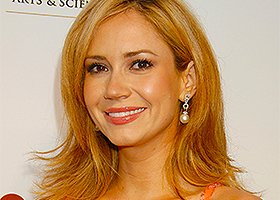 Ashley Jones (birth date 09/03/1976) is a renowned TV actress from Memphis, Tennessee. She spent her early life in Texas where they moved because of her father’s job. She always wanted to act and started her career still very little. Her 1st job was a commercial when she was only 5. Very soon she performed in different productions in theatres. Ashley finished high school where she studied arts and went to the university (unknown if finished). The blonde is 5’7” (1.70m) tall. Ashley has a Twitter account which has almost 40k readers. Her net worth is over $1m.

In 1997 she got a role in CBS soap opera. It was a big success and brought her several nominations. Her biggest hits are The Young and Restless (was seen in 206 episodes) and The Bold and the Beautiful (was seen in 767 episodes). In addition, she was seen in several episodes of True Blood. Her latest work was in You Killed My Mother, Major Crimes, and 12 Days of Giving, etc.

From 2008 she’s got the deal with Lifetime and appears in their movies like Dead at 17, The Wedding Ringer, etc.

In 2019 she’ll appear in We Die Alone and Homekilling Queen.