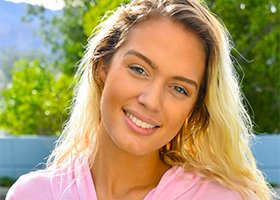 She came into the business in 2017. Before that, she was a fashion model. The 1st job was when she was 14. Palomino has already signed with several adult movie studios. She worked with FTV Girls, Exploited College Girls, Naughty America, etc. She already acted in 46 movies according to the IAFD. Soon she’ll appear in the films by Blacked and Vixen. In one interview she said she’s a preacher’s daughter and came into this industry after a wild night in Las Vegas. She already gave several interviews to Dave Naz and some other sites telling her story.

Speaking about her preferences, Palomino states she’s available for solo, girl/girl, boy/girl, and soft fetish scenes. Her social media profiles are closed and not available to the public. Athena doesn’t dwell on her private life so it’s unclear if she’s single or dating someone.
Leaked Photos: http://thefappeningblog.com/category/athena-palomino/