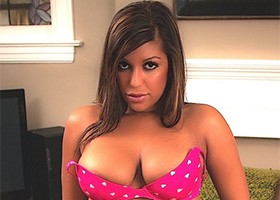 A brunette (sometimes blonde) has a slim figure and brown eyes. Her height is 5’5” (1.65m). She weighs 125 lb (57kg). The star has several tattoos on the hips (La Vita e’ Bella), back (flowers), ankle, and between shoulder blades. She’s got a piercing in the navel and nose.

In 2008 she came into the adult film industry and is already 10 years in the business. She mostly performs solo or in lesbian softcore. She appeared only in 2 movies. The 1st one was Extreme Dreams 1: Sinful Solos in 2013. The 2nd one was True Lesbian Lovers 4 in 2017. She worked with MastOnly and LezOnly Bald studios. Lee was nominated for AVN Award 5 times in 2015 – 2017 for Best Solo Website and Social Media Personality. What’s more, she was nominated in the same years for XBIZ Awards in the category Web Star of the Year. Briana got the title of Miss FreeOnes in the category of Best Cam Girl 3 years in the row from 2012 to 2014.
Leaked Photos: http://thefappeningblog.com/category/Briana-Lee/