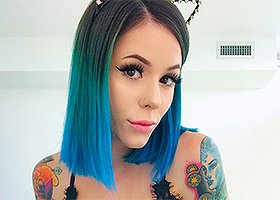 She’s got a slim figure, black hair, and brown eyes. Sometimes she turns her hair turquoise. Cortana is 5’ (1,53m) tall and weighs 110 lb (50kg). She’s got various tattoos all over her body but doesn’t have a piercing. The Caucasian adult model had breast enhancement in summer 2015. She’s very open about it and stated that she used to have 32B but now has 30G. The minor surgeries were made to correct their fullness.

Cortana was featured in Best in Sex: 2016 AVN awards. There is no data when she first appeared in the adult movies industry but she has been seen in a number of movies. She’s very active on her Twitter account and invited people to chat with her there.