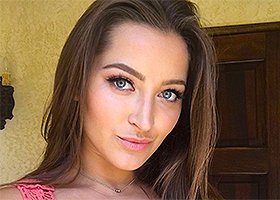 Daniels came to work in this field to repay the education debts. Her alias is Kira Lee Orsag and the 1st job was for Reality Kings. Originally, Daniels intended to be only a lesbian actress but soon began working with men as well. In 2013 she was awarded the 1st win in AVN Awards for Best All-Girl Scene. Later she became a director and worked for Brazzers and other companies. Her other prominent events include becoming the Twistys Treat of the Month (2011). The next year she got the Penthouse Pet of the Month and later got Elegant Angel’s Girl (2014) and to the Dirty Dozen two years in a row (2014 and 2015). Dani also works as a webcam model and now can be seen on Camsoda’s website.

The movie Dani Daniels Deeper brought 2 victories in the AVN and the XBIZ Awards in the same category. The collaboration with Doc Johnson resulted in a new collection of sex toys. She’s got a total of 37 nominations and 8 wins.

Outside this business, Dani is married. She’s a blogger and pointillism artist (by the name Kira Lee).
Leaked Photos: N/A