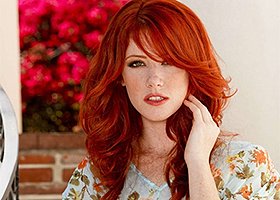 Prior to coming into the adult movie industry, Elle was an ordinary model who posed for various ads and commercials. In 2007 she participated and won Miss Teen Bakersfield.

In 2010 she entered the business and the following year performed explicit hardcore for companies like FM Concepts and Girlfriends Films. In addition, she works as an adult model now and cooperates with Twistys, Reality Kings, Nubiles, etc. Her achievements are becoming the Twistys Treat of the Month in 2013.

Elle currently lives in Los Angeles, California. She’s not active on social media but has an official page on the Elle Hearts Girls website which is regularly updated and has many photos and videos posted.
Leaked Photos: http://thefappeningblog.com/category/elle-alexandra/