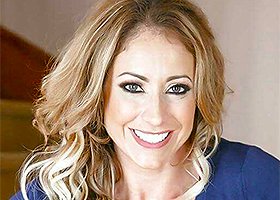 Eva Notty is a porn actress and adult model. She (birth date 07/07/1982, Tucson, Arizona) is of Hispanic origin. The model is 5’9” (1.75m) tall and weighs 150 kg (68kg). The blonde has brown eyes and enhanced breasts. Notty has several tattoos all over the body including on the left arm and thigh, on the right hip and leg ankle, and on the back. Eva also has piercings (only on the ears). There’s not much known about Eva’s childhood or family. Eva doesn’t put her private life on public display as well although her Instagram gathered 1.1m people while Twitter has 337k readers.