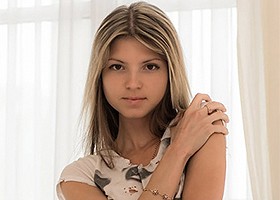 She is a blonde with brown eyes. Her height is 1.60 m and weight 40 kg. She does not smoke, drink or use drugs. Gina is a vegetarian and loves nature and animals. She currently resides in Budapest, Hungary and freely speaks Russian, English, and French.
Leaked Photos: http://thefappeningblog.com/category/Gina-Gerson/