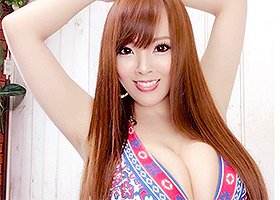 Hitomi debuted in 2007 in gravure (non-nude) video Hitomi Tanaka Bakunyuu J no Shogeki. Tanaka has a resemblance to Harumi Nemoto. She worked in the softcore movie field playing in two 2008 V-Cinema films Bakunyu Sentai Fiber Star and its sequel. After this, she began her hardcore path with the video Celebrity Shock AV Debut. She immediately turned in one of the top actresses at DMM. SOD released Hitomi Premium Collection 8 Hours which gathered her solo works. Later she signed with Arashi-Supergirl and cooperated with Oppai and Moodyz, too. All of those companies are part of Hokuto Corporation. She appeared in a total of 150 movies. So far she’s declined to sign with the U.S. studios.

Hitomi posed as a model for several magazines. In 2015 Hitomi break the record by becoming the only female to win Score Model of the Year twice (and got the 3rd the following year).
Leaked Photos: N/A