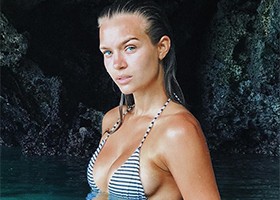 Josephine Skriver is a Danish model best known for being a Victoria’s Secret Angel. She has walked in more than 300 shows and she is only 25 years old. Her achievements also include being on the cover of the top magazines like Harper’s Bazaar, Vogue, and Vanity Fair.

Josephine was born in Copenhagen (Denmark) on April 14, 1993. She is 1.80 m (5’11”) with light brown hair and green eyes. During her career, she has worked with such agencies as The Society Management (NY), Elite Model Management (Paris, Milan), Storm Model Management (London), and other agencies in Barcelona, Berlin, Copenhagen, Hamburg, and Sydney.

She started her career in 2011 debuting for Alberta Ferretti and closing with Prada. That first season she managed to walk for the top brands like Calvin Klein, Gucci, YSL, Christian Dior, DKNY, Alexander McQueen, etc.
Since then the list of brands she walked for has expanded on the cosmic scale. She has probably worked with every high-end brand in the world.

Josephine has been featured in editorials of many magazines like Marie Claire, V Magazine, L’Officiel, Allure, Elle (in many countries) and more.

Since 2013 she has walked in every Victoria’s Secret show and in 2016, she was officially named an Angel.
Leaked Photos: http://thefappeningblog.com/category/josephine-skriver/