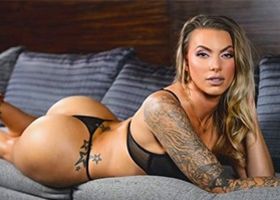 She’s 5’5” (1.65m) high. Her weight is 114 lb (52 kg). The attractive blonde (sometimes with a black hairdo) has green eyes and a slim figure. In 2009 she had her breasts augmented and three years later she enhanced her lips. She has many tattoos among which are an angel, C.A.B., Latina, flowers, stars, a skull with heart, etc. Juelz has 4 piercings.

For 9 years in business, Ventura has starred in more than 190 films. They resulted in 2 victories in the AVN Awards.

Ventura acted in many parodies like This Ain’t Avatar, Capitan America, Avengers 2, etc. Penthouse magazine placed her on the front page and in a pictorial in 2010. Juelz made a cameo appearance in a music video Killing You.
Leaked Photos: http://thefappeningblog.com/category/juelz-ventura/