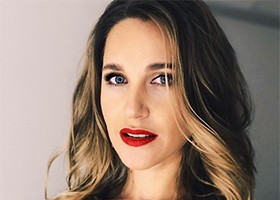 Kovalchuk (now Chumakova) is a Russian singer and a well-known presenter. She was born on November 12, 1982, in Russia. She can play guitar. When growing up, Julia was focused on gymnastics and choreography. After graduating from high school, she went to the Moscow University of Culture and Art. Used to be a member of pop band Blestyaschie from 2001 to 2008. She came as a replacement for Olga Orlova. During that period the band released 3 albums, 40 songs, and 9 music videos. The contract expired and she decided to go solo and has already released her own album and 10 music videos. Her producer is Marat Hirutdinov. She sang with Alexei Chumakov in 2 of them.

In 2013 she got married to a singer Alexei Chumakov. They’ve been dating for 5 years before that. In 2017 they had a baby girl Amelia.

The celebrity is often seen on TV. She has won Dancing on Ice and The Ice Era: Fairytale. What’s more, Julia participated in the reality show The Last Hero: Forgotten in Paradise and starred in the comedy Urgently Going to Marry (together with her husband). In 2015 she was one of the judges on the Empire of Illusion. As a host, her resume includes hosting shows like The Minute of Fame, Who’s on Top, etc.