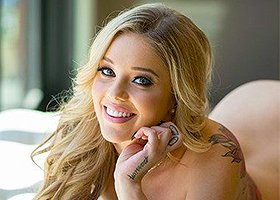 The blonde has a slim figure, greenish hazel eyes, and long, straight hair. She’s 5’6” (1.68m) tall and weighs 114 lb (52kg). Kali has got several tattoos including the texts, roses, etc. She has piercings in both nipples. Her Instagram page has more than 146k followers and Twitter attracted more than 169k readers.

She came into the industry in 2016. So far, she has appeared in 67 movies made by such studios as Brazers, Blacked, Digital Playground, Girlsway, Mofos, Reality Kings, etc. The films and modeling career brought her recognition and resulted in several nominations. In 2016 she was Twistys Treat of the Month. In 2018 her job brought her the nominations in the AVN Award (in the category Best Virtual Reality Sex Scene) and the Inked Award (as the Starlet of the Year). She’s also nominated for 2019 AVN Award.
Kali currently resides in Miami, Florida. There is no information on her private life so it’s unclear if she’s single or dating someone.
Leaked Photos: http://thefappeningblog.com/category/kali-roses/