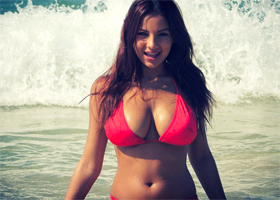 Lacey Banghard is a British model that has become known for her large, natural breasts of almost perfect shape. Lacey Banghard was born on May 1, 1992 in Bedford, England. In 2011, she won Page 3 Idol Competition, annually held by The Sun newspaper, which regularly publishes topless photos on the third page. For the first time, Lacey was seen by readers of the New Year (2010-2011) edition of the Nuts magazine.

The main feature of Lacey is her very large natural breasts with a miniature figure - 60GG (body parameters 91-62-77, height 155 cm). Therefore, bras for her are made by special order. In fact, Lacey Banghard has the narrowest chest among British models - due to this, her breasts look even larger and are naturally visible from the back. In addition to the outstanding breasts, Lacey has unusual appearance due to the fact that a mixture of European and Indian blood flows in her veins. Her mother was English, and her father was a Hindu.

She is also known for shooting in Celebrity Big Brother in 2013. However, she did not succeed in staying long in the project - Lacey became the third participant who was kicked out after the audience vote.
Leaked Photos: http://thefappeningblog.com/category/Lacey-Banghard/