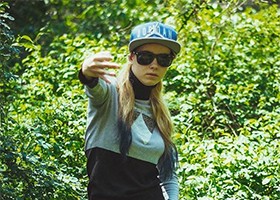 MC Anyuta (real name Anna Morozova) was born in Odessa region, Ukraine, on May 21, 1997. She still lives there. The girl had troubles finding common ground with her classmates and was bullied a lot. She was even pushed out of the second-floor window in school and had to have therapy for a few years after that. The life was hard and she had to work a lot on the factory and stores. Regardless of that, MC Anyuta recorded and released an album every year (7 years in a row). Her videos and tracks gather thousands of views on YouTube. The resume includes approximately 25 videos and 10 releases.

In 2016 she was invited to take part in the concert of a famous underground-rapper Pasha Technick in Kiev. The audience liked the young rapper a lot. In 2017 she took part in a RapSoxBattle which is the best Ukrainian rap battle. The judges’ points were split in half but the audience voted for MC Anyuta. She also won in the first season of MayDay Battle.

She has recently hit the tabloids again after the video with personal content was leaked on the Internet. However, the girl does not seem disturbed by that and simply jokes that she should release a new record while she is in the middle of the scandal.
Leaked Photos: http://thefappeningblog.com/category/MC-Anyuta/