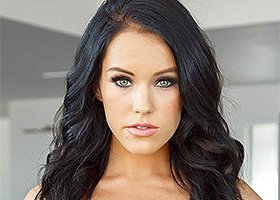 Megan launched her career in the industry at the age of 18. It was 2014. Within 4 years of her career, she managed to have deals with such studios as Nubile Films, BangBros, Immoral Live, and more. So far, she appeared in 290 movies. In an interview, she mentioned that her favorite things to do in the free time are to go shopping and to work out in the gym.