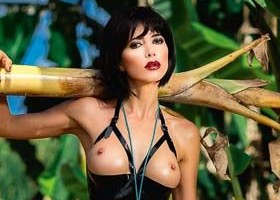 Milo Moire was born in 1983. She is Swiss conceptual artist, model and psychologist. Since childhood, she wanted to become an artist, was fond of the works of the most outrageous masters. Also in her youth, Milo Moire was fond of sports, in particular, she played tennis well. After graduating from high school, she attended college in Lucerne, which she graduated in 2001. After that, she worked in model agencies, won the Miss Bodense competition, and also studied psychology at the University of Bern and received a master's degree in 2011.

For the first time she loudly declared herself in 2013 with the performance The Script, which was seen all over the world and caused controversy in the media about the acceptability of the use of the female body in art. Milo herself notes that she uses her body consciously and consistently to express her artistic intentions. She deliberately placed herself at the junction of art and pornography.

In February 2015, the artist visited a museum in the German city of Münster, where she walked around completely nude with a baby doll in her arms. In the same 2015, Moire was arrested by the French police and spent the night at custody after she posed naked for everyone to take a selfie with her against the background of the Eiffel Tower.
Leaked Photos: http://thefappeningblog.com/category/Milo-Moire/