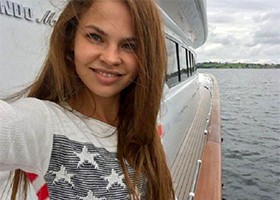 Nastya Rybka is a hunter for billionaires. According to her, in recent years she has been engaged in the conduct of manipulations of high-ranking people, as well as experiments on public opinion. Also, the girl was spotted in scandalous actions - publicly had sex with a stranger on the embankment, being naked she supported Harvey Weinstein at the American Embassy.

The real name of the girl is Anastasia Vashukevich. She was born in Belarus, in Bobruisk. The girl does not openly say the date of birth, or rather, she changes it all the time.

Nastya was brought up by her mother, a woman worked as a surgeon. If to believe what was written in her book, then her mother was an adoptive parent, she did not know her real parents. Anastasia studied correspondence in Mozyr Pedagogical University on a biology teacher. In Bobruisk, she worked as a sales manager.

While still living in Belarus, the girl imbued with the activities of sex guru Alex Leslie - a native of Vitebsk, Alexander Kirillov. Leslie is the author of pickup books and also a seduction trainer. In the spring of 2017, she gave an interview where she reported that she was a professional male hunter. Rybka also said that she already has $6 billionaires in her piggy bank.
Leaked Photos: http://thefappeningblog.com/category/Nastya-Rybka/