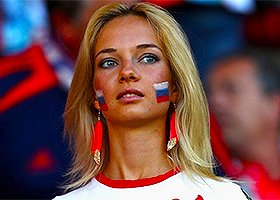 Natalia Andreeva (real surname Nemchinova) is a Russian model and fitness instructor. Natalia Nemchinova was born in 1990. After graduating from high school, she received a university degree in arts. In the early 2010s, Natalia moved to Moscow. She is a fitness instructor. In her youth, she worked as a model, but this business was never her main occupation. She starred for glossy magazines rather in the form of entertainment, a kind of hobby.

Natalia became famous to the general public after the press dubbed her the most beautiful Russian fan at the World Cup. Journalists took many pictures of an attractive young girl. Photos instantly spread over the network.