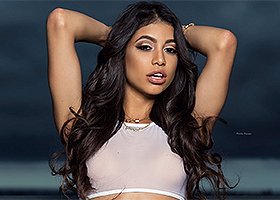 Her stage names also include Veronica Rodrigue, Barbie, Barbie Bree, Barbie Booty. The actress is 5’3” (1.60m) tall and weighs 97 lb (44kg). The slim brunette has brown eyes. She doesn’t have any tattoos but has piercings in the navel and left nostril.

Her Twitter account has already gathered 417 thousand readers while an Instagram profile has 1.7 million followers from all over the world. She works as a webcam girl on Camsoda and has live shows there every week.
Leaked Photos: http://thefappeningblog.com/category/veronica-rodriguez/